Yes, Men Can Do Pilates, Too

Although women might rush out to buy the gear and convince their friends to come to class, men can benefit from Pilates just as much as their nicely-outfitted counterparts. It’s the ideal exercise for men in that it reduces stress, increases flexibility and can enhance performance in other sports. Just look at Joe. 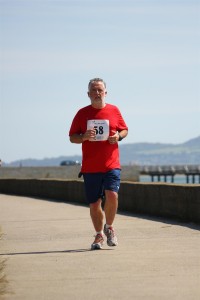 Karl Carrick running the Clontarf Half-Marathon in preparation for Berlin.

Joseph Pilates invented his system after being interned during World War I and taking the springs and rails off his army cot to create a resistance system for working out. That home-made, but revolutionary, contraption was the precursor of what we now know as the Reformer. Pilates trained as a gymnast, boxer and diver before putting together his own exercise method, using all the muscle groups and uniting mind and body. He believed in its accessibility so much that he envisioned it one day being introduced into primary schools around the world!

Pilates gets plenty of press about how it can help women achieve a slender, toned physique, and yet men may be the quiet winners of the “who can benefit most from Pilates” contest.

Take Karl and Anthony, two clients in Sandymount who just completed running the Berlin Marathon at the end of September. They began training at the beginning of the summer for an hour on Saturdays in the open Pilates mat class, and both quickly saw improvements in their stretching. They also began to incorporate simple stretches into their daily routines. Despite Karl’s shin splints and Anthony’s ongoing leg strain, they finished the marathon in 4:50 an 4:30, respectively. Quite impressive, and inspiring to have in class!

You asked for it. You got it. Bootcamp Pilates. Starting tonight at 7pm at Exhale,...
Blog