Bones,muscles and all that stuff… – D4 Pilates

It is one thing to tout Pilates as a remedy for back pain, and another to experience it personally. As some of you know, I twisted my back last week while putting my son in his car seat, causing my lovely spine to go into a bit of spasm.

A combination of Danielle Mah’s dry needling, rest, and some basic Pilates exercises had me back working at full capacity within the week. There is something to be said for imprinting, knee drops and basic core exercises. (As well as some temporary – but much appreciated – pain inflicted by Danielle.) They do indeed work.

Interestingly, during the same week, I had a conversation with one of my dearest friends in the US, who has been an avid Pilates follower for almost as long as I have been teaching it. To give you an idea of her level of dedication, for the past several years she has managed to set aside 30 minutes each night to do Pilates at home, with two young children, a demanding full-time job and ageing parents – all of which required much of her attention. Often when I would call in the evening, her husband would say, “10 more minutes, Christie. She’s almost done with her Pilates.” Usually by that time I would be watching the Good Wife.

Well, last week’s conversation revealed that she has stepped up her game. Instead of doing Pilates at home, she now does four equipment classes at a studio each week. Her level of intensity seems to match the stress levels in her life, and while she does admit Pilates can be a way to release tension, she has a new reason. Her strong motivation right now is because she considers Pilates an investment.

“Yes, it’s an investment for me, but also for my kids, so they won’t have to go through what I’ve gone through with my own parents,” she told me. Both of her parents suffered from sore backs requiring surgery – among other more complex health issues. I can vouch for the difficulties all of that presented, and how hard it was for her to watch her parents grapple with such pain. But, like many of that generation, her parents led a more sedentary lifestyle. I doubt there were any Pilates videos in their library.

But true to her disciplined nature, this friend, methodically doing her hundreds as chaos swirls around her, embodies what Pilates is all about – a commitment to physical and mental well-being that is steady and consistent. Maybe in some future post I’ll ask if I can reveal her name. But for now, after my brief wake-up call to constantly mind my own back, I want to thank her. She is more than inspiring.

Leg it! Our podcast for fabulous legs. – D4 Pilates

Here’s a five-minute workout for “Fabulous Legs, Fast!”  To really... 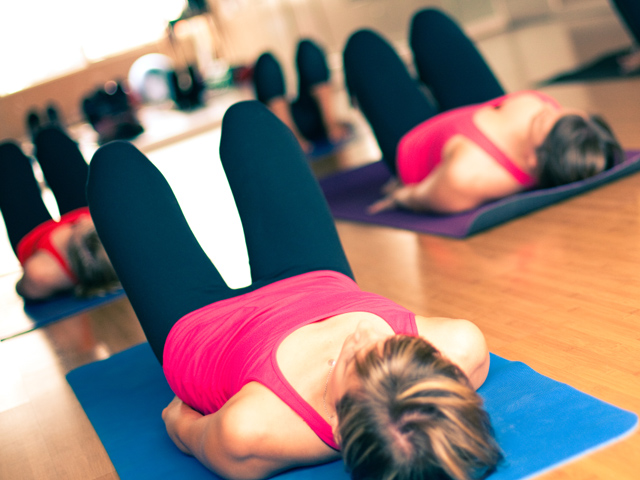 Well, as those of you who were in class today know, I have started to think about...

Is Pilates ‘The Answer’ for back pain? – D4 Pilates

By Danielle Mah, Physiotherapist with...
← The D4 Pilates ‘Reformation’ – D4 Pilates
An Animated History of Pilates →